In the last few years the use of Triptychs and Diptychs is something I have used to connect paintings, mostly to create a narrative. Common in medieval religious art, triptychs have been popular with renaissance painters and sculptors such as Hieronymus Bosch and Hans Memling.  Working in Triptychs has come from an early  interest in the work of Matthias Grünewald, in particular the  Isenheim Altarpiece. 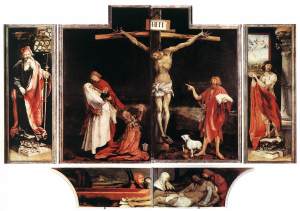 Whilst not actually a triptych, the altarpieces collection of intertwined images told a story in the way that a single image cannot, with a single painting the subject generally shows a moment or the implication of a theme, whilst working with multiple connecting images the artist can show more to give a stronger narrative.

Hans Memlings work was a precursor to Mathis Grünewalds. He too used gothic christian imagery, the old testament type with demons and violent crucifixes. The triptych tells a story, the middle frames tends to set the theme, the painting then arches to each side as one picture or splits into different images.

The most familiar name attributed to the use of triptychs is one of my favourite artists, Francis Bacon. Bacons use of the triptychs gives gravitas to a selection of images, the viewer is aware that the three are connected and of upmost importance to each other yet they are not physically connected (in the case of Bacons work anyway).

I like to think that there is a connection between this was of displaying work and the frames in a comic book or graphic novel. This connection with comics is something I have found in other aspects of my work, be it from simple sketches to ideas from artists I have researched it is something I believe can be linked with some of the images of propaganda and protest I have viewed. My next point of research will be on the use of comic imagery and how they  connect to my own practice.

The below image was one og my early attempts at a triptych, I actually still quite like it, I even included speech bubbles, I think the use of speech bubbles is something I might look into again. I have thought about it but the time hasnt seemed right to include it again.