The article found on the OCA website deals with artist Charles Ray and his surreal sculptures. Charles come off as having self deprecating nature, his stories of banging his head and loosing this memory are as strange as his creations but he certainty has an interesting style, he moves past the obvious ‘high art’ motives and focuses on what is normal deemed as crass and potentially exploitive. But his isn’t necessarily true, the author mentions the ‘reinvigoration of the audience’ as though they used to the mundane typical bronze and marble sculptures of busts and figures in the Uffizi or the V&A Museum. The artist instead subjects the viewer to these seemingly dysfunctional figures and attempts to create a place for them within a particular space, moreover its to explain their purpose within the space. The artist himself was quoted on the frieze website as saying  (http://www.frieze.com/issue/article/the_shape_of_things/) that sculpture is’ actually sequencing form and space’. An elegant statement that perfectly sums up any art work and its connection with the space.

The relationship with space and the work is elaborated further with Rays earlier work ‘Clock man’. 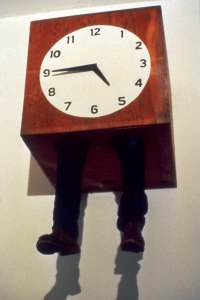 Clock Man was a performance piece by Ray and involved him being placed inside a large clock, only his feet dangling out, the artist then moved the time pieces around in line with his own circadian rhythm. When the show was over he had moved the clock hours forward by three hours more than had actually passed, so was the perceived difference in time experienced by the artist compared to those outside the box. The artist had formed his own space within the gallery, time itself being relative, he mad mimicked the physical existence of the liner nature of time as well. He had placed himself within a physical space moving through time.

As well as the artists utilisation of large spaces the content and context of his work is of relevance to my own work, the manipulation of what the audience expects compared to what they see. My own work plays with  the idea of  political portraiture, its grandiose and sometimes pompous nature, the contemporary white frames and soft watercolours combined with potentially grotesque and sometimes sensual faces in coitus. the who do you do not expect doing what it is only natural to do. The impeccably maintained personalities, scripted political conversations and statements, all striped away to something so basic yet so unexpected.